The concept of an Irish Mining History organisation was established in 1995 as a mechanism to celebrate and promote awareness, appreciation and conservation of remains of what is arguably Ireland's oldest industry. This is an industry which commenced more than 7000 years ago during the Stone Age, and which has, right up to the present day, played an intimate and pivotal role in the evolution of human society, culture and economic activity in Ireland - a contribution most eloquently attested in the names given to the earliest phases of human cultural and societal evolution - the Stone, Copper, Bronze and Iron Ages.
​
​The organisation evolved significantly, in name and purpose, from its formal inauguration as the Mining History Society of Ireland in 1996. In 2001, it was formally reorganized as the Mining Heritage Trust of Ireland Ltd, in order to better position the organisation to avail of funding and other opportunities to achieve its objectives: to embrace and promote an integrated approach to all facets of the history of mining in Ireland - facets which range from history per se, to archaeology, archaeometallurgy, ecology of mine sites, genealogy, fiscal history, surface and underground surveying, site and building conservation, education, and sustainable presentation of extant remains.

The Mining Heritage Trust of Ireland seeks to develop the informed public awareness, appreciation, conservation and enjoyment of all facets of mining heritage throughout Ireland.
​
The objectives of the Trust were: 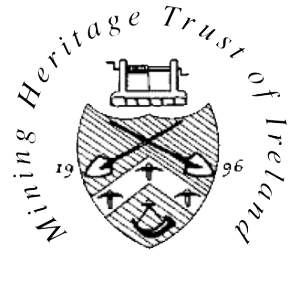 The obverse of the token shows a bust of St Patrick and the reverse a crest and shield of arms, which may be regarded as the Arms of the Company. The shield incorporates crossed shovels, miners picks and a powder horn and is surmounted by a windlass.